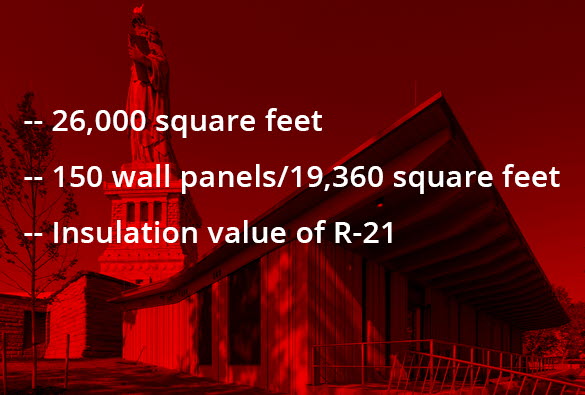 “This is an incredible project on an incredible site, a very high profile, so they (High) were really understanding in our design intentions, and they definitely went out of their way to make solutions for the kind of complicated geometry that we were trying to pull off there.”  - Dan Piselli, Manager/Project Architect/Director Sustainability, FX Collaborative

The Statue Of Liberty has a fascinating story behind it, and while the old museum on Liberty Island told that story, the museum was so small that only about 20 percent of the 4.5 million annual visitors to the island could actually get into the museum. So, the National Parks Service and the Statue of Liberty-Ellis Island Foundation realized that a new museum was a necessity. Those organizations put together a design for a new museum, and High Concrete became a vital part of the construction team.

The Statue Of Liberty stands on Liberty Island, which is a small piece of land in Upper New York Bay. The island covers only 14.7 acres, the equivalent of 11 football fields, and the only way to reach the island is by boat.

The original plan was to transport concrete trucks to the island on barges and to pour concrete for the panels on the site, but the professionals planning the construction decided that prefabricating the panels offsite would be a better alternative.

Wajdi Atallah, Owner’s Rep for SBI Consultants, the Project Manager, knew that High would provide talent and experience that would lead to the successful completion of the project: “My recommendation was to speak with High Concrete, knowing the combination of High Concrete’s experience, skill in precast, and my years of experience with their sensitivity to building architecture. I knew we would have the right mix.”

High cast the panels at its Denver, Pa. plant and trucked them to Jersey City, N.J. with just one panel per trailer. Each barge could carry four panels, but because there’s no storage room on the island they were delivered on a just-in-time basis.

In addition, the crane used to lift and place the panels had to be disassembled and reassembled on the island. Transporting workers to and from the island also took a chunk out of their workdays.

Doug Phelps, Construction Manager for Phelps Construction, the contractor for the project, said, “The building was originally designed as a poured-in-place concrete structure, but we were faced with the obstacle of ‘How do we get all those concrete trucks out here to an island?’ At the same time, this project is slated for LEED Gold. It all made sense to get somebody like High Concrete involved, where we could do precast panels, get the thermal envelope we needed, but also solve a lot of logistics problems by not having to barge hundreds of concrete trucks out here daily to try to pour a cast-in-place concrete structure.

“We felt that High Concrete was the only firm that had the expertise to do the overall coordination that was necessary to make sure that this building was built properly and was the success that it is.”

SENSITIVE TO ITS ENVIRONMENT

The original plan called for granite walls, and they would have been much more expensive than High’s prefabricated concrete panels. Granite would also have required workers from many different trades, so using High’s panels saved the project around $700,000.

The vertical panels were designed to look like the Palisades cliffs along the New Jersey side of the Hudson River. The Lenape Indians called the Palisades "Weehawken,” a word that means "Rocks that look like rows of trees."

The new museum has incorporated many steps that have enabled it to earn the Leadership in Energy and Environmental Design (LEED) Gold Standard from The United States Green Building Council. High has contributed to this certification by supplying highly insulated walls and designed with a low window-to-wall ratio. The museum also has a large green roof, a rain garden, native vegetation, and bird-friendly glass.

The Statue Of Liberty is a symbol of the American Dream of freedom and opportunity, and the High Companies are an embodiment of that dream. Started as a small welding shop during the Great Depression, the High Companies have grown to employ more than 2,000 outstanding people in many different fields, and we’re always eager to welcome more. So, if the idea of working on projects like this excites you, and if you believe that your skills will make you a good fit with our team, please get in touch with us.

Thanks in part to High’s panels, the new museum has received some prestigious architectural awards, including: 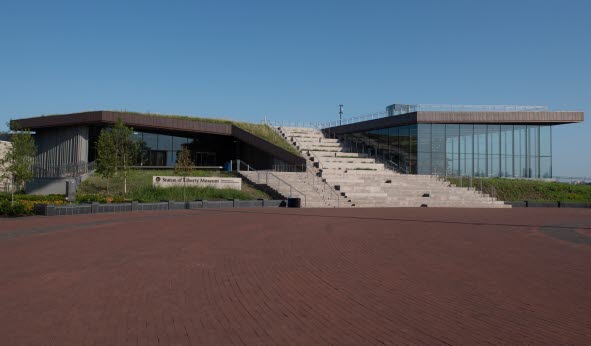 The new museum, seen from the north, rises out of the earth to provide an understated modern counterpoint in deference to the Statue of Liberty. 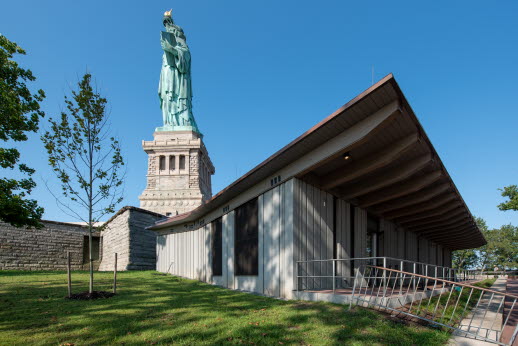 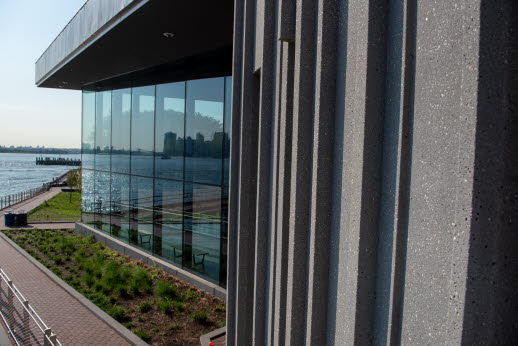 The west elevation comprises a mix of materials that help to showcase the soaring glass windows that surround the display of the Statue's original torch. 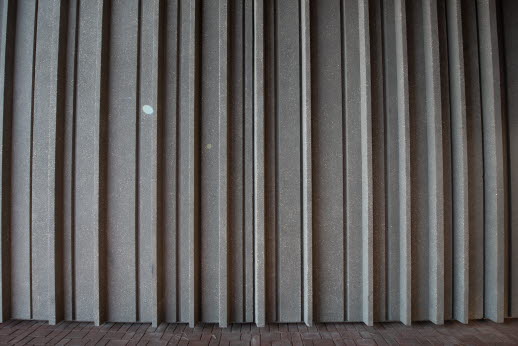 Insulated wall panels of R-21 were produced with an architectural formliner to produce a rugged design that gives a nod to the Palisades Cliffs across the harbor from the island. 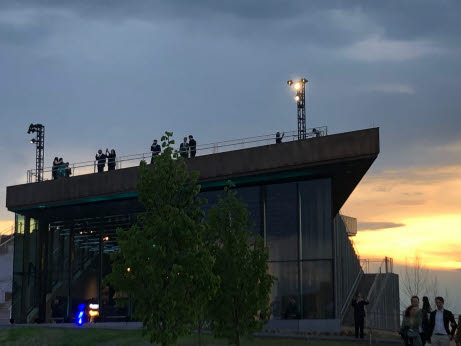 Celebrities and business leaders feted the opening of the Statue of Liberty Museum in May 2019. 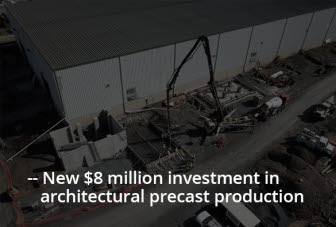 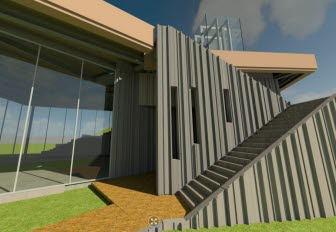 The Pennsylvania College of Health Sciences Campus at Greenfield>>