March 1, 2009—Inner City Group, with the philanthropic support of the High® companies, won the 2008 Community Impact Phoenix Award for its Roberto Clemente Park revitalization project in Lancaster, Pa. The project was recognized for its innovative and creative techniques to revitalize blighted, contaminated lands to productive, new use.

The award will be presented at the United States Environmental Protection Agency’s National Brownfields Conference, Brownfields 2009, in New Orleans in November 2009.

The Inner City Group is a non-profit economic development corporation located in Lancaster, Pa. It was formed in 1997 by the Lancaster Weed and Seed Program and the Partnership, a consortium of five community based agencies including Crispus Attucks Community Center, Community Action Program of Lancaster County, Neighborhood Services, Spanish American Civic Association and the Urban League of Lancaster County, to serve the southeast area of the City of Lancaster. The mission of the Inner City Group is to work collaboratively with other neighborhood based organizations to develop a healthy and sustainable neighborhood economy, in a way that builds upon community development and social service initiatives already in place in the neighborhood.

The High companies have a long tradition of commitment to their community, aligning with organizations such as Inner City Group, Habitat for Humanity, and the United Way in order to help address needs in the areas of education, health and human services, and arts and culture.

The Phoenix Awards™ are affiliated with the Phoenix Awards Institute, Inc., an environmental and community service foundation, located in Mechanicsburg, Pa. Created in 1997, this prestigious award honors individuals and groups who are working to solve the critical environmental issue of transforming abandoned industrial areas into productive new uses. 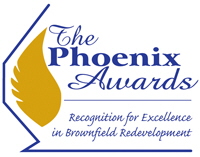